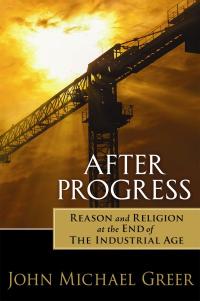 My recent research into societal collapse (watch this space) lead me to John Michael Greer, who offered an uncommonly wise perspective, so I purchased this book to update myself on his post-peak oil thinking.

It describes progress as a 'civil religion' and examines how deeply ideas and more importantly assumptions about progress lie in our civilisation's narrative compared, say to other civilisations which reified the past or the unchanging nature of things.

Greer explores Spengler's work about civilisation lifecycles which have distinctive patterns particularly in their evolving philosophies, and identifies ours as past its peak, and ready for rationalism to give way to a second religiosity. Peak oil is a major driver in this - like many authors I'm finding Greer credits fossil fuels for almost all the growth of the last 200 years, and says that growth must end as energy extraction peaks.

The main theme of the book then is about the long term decline we are now entering and the gap between reality and the religion of progress. That hubris of policymakers is leading not only to waste, and of course needless suffering and death.

He memorably cited the optimism around fission research, saying that even if they could make it work the facilities would be far too expensive to be viable and that it is the assumption that all problems are solvable that means this field is still lavishly funded.

Towards the end he gave some hints about what decline means in real life. It means that the average business doesn't make a profit, can't pay back loans in full, and can't pay rent. I was reminded of friends trying to run micro-enterprises unable to pay the rent on the shop- even though half the shops were empty.

Now I'm starting to think through - accepting decline would mean

And don't forget folks this decline is only the backdrop to climate chaos!