The radical experiment in community cryptocurrency, Faircoin, reached a milestone this week when the Faircoop assembly declared that it would sell and buy back coins from its members at parity with the Euro. This means that the cooperative maintains a pool of cash available for redeeming coins from active members who accepted them but cannot spend them. This gives confidence to traders and the coop also offers a much more stable (and easy to mentally calculate) rate than the free market.

I explain this strategy in more detail in my previous blog post.

This public attempt by a self identifying group to manage the market makes Faircoin unique amongst cryptocurrencies. As well as having an 'official' price used by the cooperative, Faircoin has a free-market price because it is publically traded like any other cryptocurrency. However Faircoop hopes that Faircoin holders will coordinate around a simple strategy of mutual benefit, in contrast to the every-man-for-himself attitude of the free market. The strategy involves holders simply committing to spend the coins, (or at least try to spend the coins!) on goods and services rather than selling them for cash or bitcoin, which generates no real economic activity. With that commitment Faircoop traders benefit both from immediate spending and people holding the coins to spend later when they hope the price is higher. Holding the coin, any asset in fact, reduces the supply and helps keep the price high. As the spending power goes up, many people feel richer and more inclined to spend and even donate. 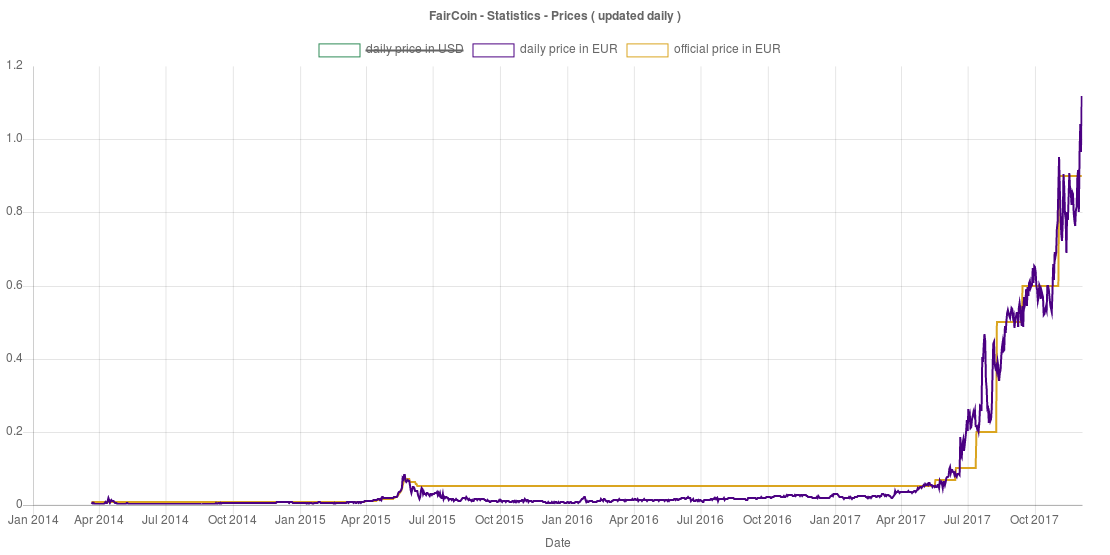 The first chart shows Faircoin's history against the Euro, with the straight brown line showing the official price struggling to stay above the rapidly rising free market price. (Click for more detail.) The second chart shows Faircoin keeping pace with bitcoin, which doubled over the last six months. It also shows volatility against Bitcoin reducing over the last 2 months. It also shows the free market price responding to the news of the official price, leaving me wondering whether the Coop had finally wrested control of the coin from the free market!

If the coop really does have control of the coin then the strategy for the official price must no longer be to follow Bittrex as that could create a feedback loop. Nor to push the official price up as high as the Bittrex will support. Faircoop's aim is to be able to redeem the coins at the official price for all who ask, and that means reducing the redemption requirements by creating a real economy, where the coins circulate and facilitate trade rather than returning to their issuer. This is only possible to the extent that the coin is used for payments by producers of goods and services in the real economy.

Anyone can speculate on Faircoin by purchasing them in Bittrex where the market is somewhat liquid. But those who really want to participate should install a wallet, ensure you have the private keys somewhere safe, and buy from Faircoop at the official price (not more, of course, than you can afford to lose).

However your participation does not really begin until you supply goods and services for Faircoin, and/or demand goods and services for Faircoin, thus literally creating (the space for) a market around you. Admittedly trading is easier for those living in the footsteps of founder Enric Duran (Barcelona and Athens); but trying to use Faircoin anywhere is one way each of us can contribute to growing a solidarity economy! You should always trade at the current official rate (today 1EUR!), not at this minute's Bittrex price. Using the official rate strengthens the shared story that this money is a collectively governed in the interests of stability and utility, (unlike say, Bitcoin) and that each transaction is greasing larger economic wheels!

And as the coins you don't spend increase in value, remember that that you are merely the custodian of value which belongs to the whole community. How can the solidarity economy grow if unearned profits are liquidated? As the holder of several thousand Faircoins I am committed to spending my profits, not selling them!