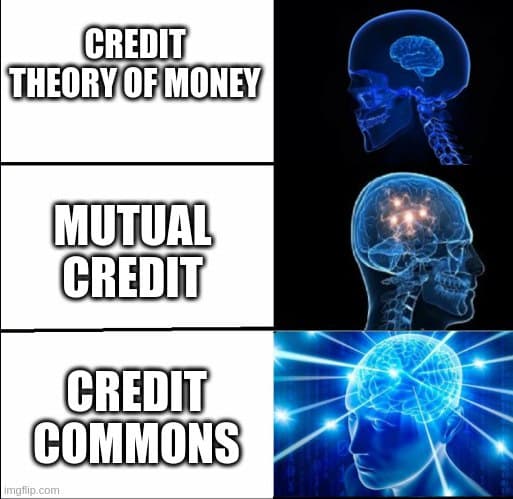 Last week I was pleased to attend a Crypto-commons Gathering with a crowd of people who believe that cryptocurrencies have a role to play in bending the arc of the future towards justice, peace and prosperity.

This was the most blockchain-centric event I've been to, and I was only invited because the economics students who organised it were fans of the late David Graeber and wanted to expose their crypto colleagues to the credit theory of money. This I was able to do, with some success I think.

So I've been invited to teach a couple sessions at the Token Engineering Academy, and to co-author some articles for the sector in which I will argue that, historically, credit creation is where the power lies rather than in token creation.

So I'll be expanding my discourse from the few converted souls who follow me already to a larger public. I won't be changing my intention or dropping the credit commons, but I will trying to bring some of my colleagues with me.

The energy and optimism in cryptocurrencies reveals the dearth of those things in the 'old' complementary currency field. This is not only because of the relative youth of its advocates, but because there is so much money around buoying up the sector. For example the Commons Stack, which builds token systems to facilitate management of commons, employs about 3 people paid from the pocket of a single crypto investor, and it is not unusual.

From my new position in the movement I'll be better placed to seek funding for the next stage of Credit Commons development. I'll be saying the same things, not to my few followers who are already converted, but to a larger and perhaps more influential audience. Part of the message will be that trust is essential for all but the most anonymous finance and that trustless technologies lead to overengineered, expensive solutions.

Finally to gain social acceptance by the majority of Millennials present I started creating memes though apart from the above I won't attempt to delight the readers of this blog with them!