A long time ago, when Stewart was an estate agent, interest rates jumped from 5% to 15% in a day (Thanks to George Soros) and three of his clients committed suicide. Stewart decided to design a new, less money-centric life, and started New Morray LETS in Forres, near Findhorn, Scotland twenty years ago. His energy and commitment helped the LETS to grow steadily and now he reckons 60% of his economic life is through LETS. Working with a friend, he developed and fine-tuned a MS Access application to administer the whole system, including printing the directories. Soon he was travelling all over Scotland setting up LETS, sharing software and even had email-relay intertrading network which works to this day!

When he flew to Japan to extoll the virtues of local exchange that he smelled a paradox and returned home to focus on local issues where he is now a local counsellor and organiser. That is why I had never heard of him until this summer, when I visited Findhorn for the GEN conference. Fate construed that Stewart was at a turning point in his life and accommodated me with probably the only ecovillager who could and would connect us. So Stewart's intuition to come to Greece was confirmed by my going there, and so we hooked up for this two weeks.

First for the Festival for Solidarity and Commons economy where we each had 90 mins in a crowded cafe. I had planned to run the trading floor game, but on seeing the venue I hashed together a script in which we presented the history of money in a lively way, which seemed appreciated. He gave a talk about his experience but also drawing social and monetary parallels between his LETS and natural systems which won a much greater response.

And so to Volos where the beleaguered TEM team has been appreciative of outside experts this last couple of years, but (in my opinion) has received much more theoretical advice than practical. Whereas I work like a dog on my software and give it to everyone and no-one in particular, Stewart's approach is to travel offering direct exchange. He probed and learned that our host had a tonne of logs which needed moving up 3 flights of stairs. TEM doesn't publish a directory, so she had only asked two people who had declined. But the very next day, those logs were moved and I had reciprocated directly for once! Stewart all but decided there and then to move to Volos for six months a year, and hopefully from there to do the same for Greece as he once did for Scotland. 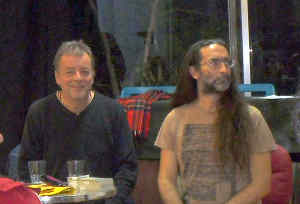 Then to Thessaloniki where we had to decide how best to serve a local activist group in a 2 hour evening session. We settled on a conversational format - I explained what's wrong with money and why mutual credit systems are an appropriate citizen's response, Stewart talked about how LETS works to build community; then there was a barrage of questions I thought would never end.

Our final destination was Skala a small ecovillage which is looking to formalise its structure and build the local economy, but more endogenously than many ecovillages which get money from hospitality, courses and benefactors.

Stewart lives by intuition and exudes spine-tingly stories about how guidance and knowledge come, sometimes reliably, from nowhere, so its been an honour to spend this time, and I look forward to seeing the fruits of his next year's labours.